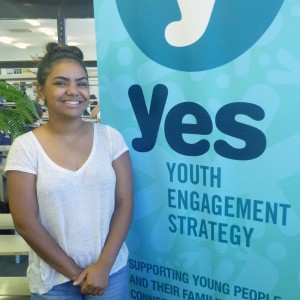 KAYLYN ON PATHWAY TO UNIVERSITY

Kaylyn Giles, 18, a former student of the Port Augusta Secondary School YES Centre, is on a pathway to a university degree and her dream job.

Kaylyn is undertaking a foundations course at the University of Adelaide, in the hopes of eventually undertaking a Bachelor of Science (Animal Sciences) and majoring in Zoology.

Kaylyn’s dream of being a zoologist stems from her passion for animals. Zoology includes monitoring the behaviour of animals, conserving wildlife through projects, breeding animals and stopping critically endangered animals from becoming extinct.

She also did her Research Project, looking into the effects of alcoholism on families.

Kaylyn said when she finished year 12 she felt a massive relief, knowing that she had finished not only year 12, but all of her SACE certificates.

Kaylyn said foundation studies is a preparation program designed to get students ready for the work load and expectations of university study and to show students how assignments should be presented.

She said it would take 6-12 months and then the Science degree would be three years of full time study.

Kaylyn will be housed under the Indigenous Youth Mobility Program while attending University- a group of share houses for university students.

Kaylyn said she was nervous but excited about what lays ahead.

She credited Ms Mari Yu and Ms Karen Wallace from the YES Centre with helping her succeed and said they both offered huge support and encouraged her to keep going when she felt like she wanted to give up.

She also said her mother Nat Giles and family supported her with her education.

In Kaylyn’s five-year plan is the hope of working as a zoologist in cities around Australia.