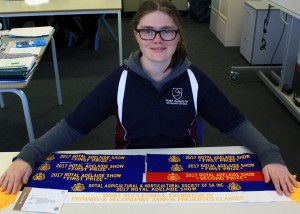 Such was her success, Bonney took out the Most Successful Exhibitor in Primary and Secondary Jams and Preserves classes.

Bonney, 17, a Year 11 Child Studies student in the YES Centre, received five first places and one second place in her tenth year of exhibiting at the Royal Adelaide Show. She began when she was eight, which is the minimum age to exhibit. Her firsts were attained for the categories Berry Jam, Fresh Jam, Marmalade, Sweet Spread and Salad Dressing or Mayonnaise. She received a second for Tomato Sauce.

For her wins Bonney received ribbons and prize money.

The recipes she used were either family recipes from her grandparents, that have been handed down through the generations, or recipes she made up herself.

Two of her own award-winning recipes were lemon and lime marmalade, and lime and lemon butter.

“I’d say it was probably my most successful year so far,” Bonney said.

Bonney has been entering produce and cookery sections of country shows throughout South Australia since she was eight.

Her love of cooking and exhibiting at shows comes from her grandparents, Bob and Margaret Rankin of Wilmington.

The Rankins have been exhibiting at country shows and the Royal Adelaide Show for more than 20 years. The couple are now judges at several country shows.

Bonney does all of her cooking with her grandparents at their home.

She said she enjoyed making up recipes and one of the best recipes she had come up with was in Home Economics last year when she made a delicious meat loaf.

As well as cooking, Bonney also enters her home-grown produce at country shows, including pumpkins, spinach, snow peas, broccoli and carrots. She attributes her daily watering, horse manure for fertiliser, straw for mulch, and ensuring the vegetable garden is kept free from weeds as key to her success.

Bonney said exhibiting at shows is something that is dwindling and she encouraged others to give it a try.

“It’s something I’d recommend others do if they get the chance,” she said.

This is the last year Bonney was eligible to enter junior categories, but she said she is keen to continue exhibiting in senior categories in the future.

Bonney does not have any aspirations to pursue cooking as a career, preferring to focus on her goal to work in childcare.