CHEVON GRASPS EVERY LEARNING OPPORTUNITY THAT COMES HER WAY 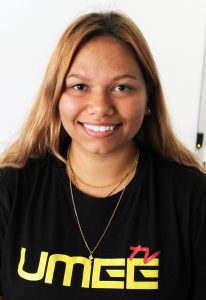 Since leaving school 19-year-old Chevon McKenzie has made the most of every opportunity that has come her way.

Chevon completed her SACE at PASS in 2019.

She spent study periods in YES during years 10, 11 and 12, and also took part in Textiles lessons.

“I felt more comfortable in YES,” she said.

I found it easier communicating with everyone in YES and enjoyed the company and support in there.”

Most recently she has been working as a host for a series called Umee TV.

It is a short television series of six episodes based on youth in Port Augusta. In this role Chevon has been interviewing community members on issues relevant to youth.

A recent project Chevon has completed is a short film titled My Triumph.

She attended a two-day IndigiTUBE workshop and completed the film during those two days using her phone.

“It’s about the challenges I faced when my mother passed away,” Chevon said.

The film will be released in October.

In her role at Umeewarra Media she enjoys the filming and writing aspects the most.

During Naidoc Week Chevon also did some live filming of events around Port Augusta for IndigiMOB and First Nations Media.

She also created a short film on NAIDOC Week activities in 2020.

Chevon has a passion for film and last year she attended a scriptwriting workshop.

“I want to get into films and theatre. I want to write, produce and act as well,” she said.

Drama piqued her interest at school in the film production and acting realm.

She recently attended a week-long acting workshop in Adelaide, ACTNOW, at the Rumpus Theatre and has also undertaken an online acting course with Elaine Crombie. Elaine is a South Australian Pitjantjatjara Yankunytjatjara actor, director, producer, singer/songwriter, comedian and writer who has appeared in multiple plays, TV series and films.

As well as working at Umeewarra, Chevon is busy undertaking study.

She has almost finished her Certificate 3 in Education Support, which she has been studying online.

She has recently started studying Journalism through First Nations Media News Project and has completed courses on Interviewing Techniques, Writing for Film and Radio, and Delivering News.

This year Chevon obtained a Carclew Fellowship grant to continue her work with Umeewarra Media.

At present, Chevon is co-hosting the Country Show on Umeewarra Radio.

She recently returned to PASS to speak to Miss Potter’s English class about filming techniques.

She says she was grateful that when at school she could find someone to help her whenever she needed it.

“Always ask for help,” she said. “Don’t be afraid to talk to anyone if you are struggling.”

“Take every opportunity you can.”